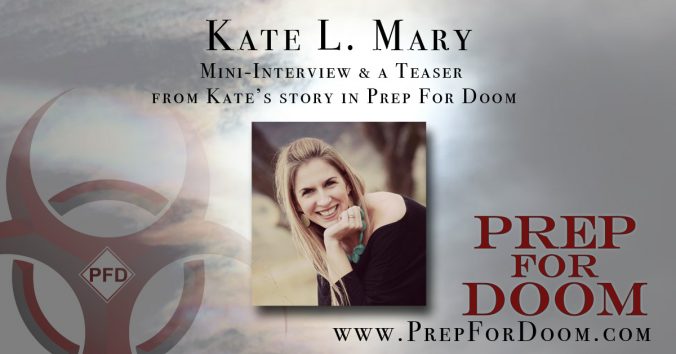 PFD Story Title: Don’t Look Back
PFD Chapter: Eighteen
Main Characters: Eve, a young woman who finds refuge at Charleston Air Force Base, and Hicks, one of the soldiers.

Prep For Doom isn’t the first thing I’ve worked on that starts with the outbreak of a virus. My Broken World series also has a killer virus sweeping the country, but there is one significant difference between that virus and the one in Prep For Doom. My virus turns people into zombies.

While writing a zombie series is fun, the survival aspect of apocalyptic stories is what I really love. It had already entered my mind that I should start a non-zombie series after finishing Broken World, so when the opportunity to get involved with Prep For Doom popped up, it seemed like perfect timing.

What do you think would be the scariest kind of apocalypse?

Zombies would have to be the scariest possibility—no matter how far-fetched. In a zombie apocalypse the survivors wouldn’t just have to deal with all the unknown factors that come with weather, survival, and other human beings, but they’d have to do it all while hiding from flesh eating creatures. It just adds another layer to the survival aspect, which is why I think so many people are enthralled with the zombie genre right now.

Tell us one thing people don’t know about you or might be surprised to find out?

I really didn’t start writing until about three years ago.

I wrote a little on and off in when I was in my teens, but after that life got in the way and even though it was something I always wanted to do, writing got pushed aside. I went off to college, got married, then started having kids, and for a long time I was just too busy to fit it in. Then my family moved to California and my husband was gone all the time, and I found myself with a lot of free time. Everything just kind of fell into place after that, and I spent the next two years writing and polishing my skills until I finally had a product that was good enough to get published. I wrote a lot during that time—around ten books—but some of the early stuff is so bad that they’re going to need a major overhaul before I can do anything with them. My first book came out last May, and since then I’ve put out four other books on my own, gotten an agent, landed a three book deal, sold the audio rights to my Broken World series, and put a short story in this anthology! It’s been a busy year and right now it doesn’t look like it will be slowing down any time soon.

I like to use bits and pieces from my life when I write and put my characters in settings I’m familiar with, and Don’t Look Back is the perfect example! It not only takes place in Charleston, SC, but on the Air Force Base where I actually lived with my family for about a year and a half (before buying a house and moving off base). Hicks, one of my main characters, is also a C-17 pilot just like my husband. We’ve joked so many times about stealing a C-17 when the zombie apocalypse happens, so before I even started writing I was trying to figure out a way to integrate that into my story.

While I don’t want to give away too much about what you can expect to find in Don’t Look Back, I will say that I’m known for throwing romance into post-apocalyptic settings, and this story is no exception!