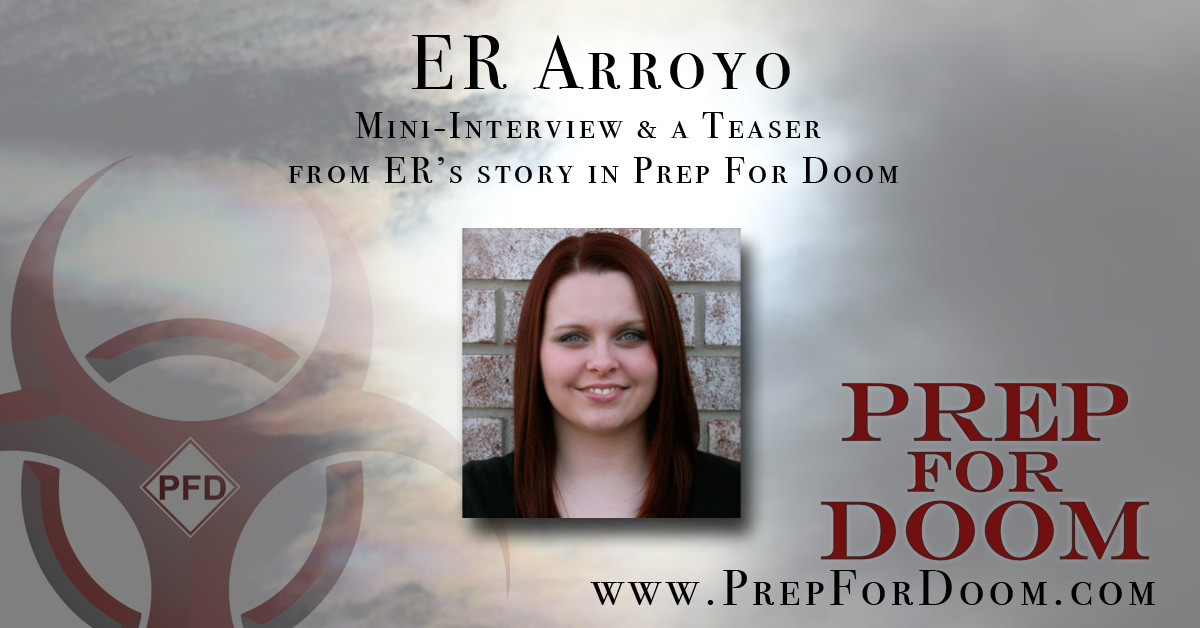 “Shhh.” Kane brought a finger to his lips.

When Kane returned to the peephole, a bloodshot eye greeted him, followed by a loud thud against the door. “You alive? Still not minding your own business? I’m doin’ her a favor, you hear?” the man yelled through the door. “I’ll do you one, too! Who else you got in there with you?”

My YA dystopian series takes place around 20 years after the apocalypse, and it was chemical warfare in that case. This is a much different approach with it being a viral pandemic and writing about the actual apocalypse instead of the aftermath. Like my two novels and one short story (so far) in the Sovereign Series, my story in Prep For Doom – Martial Law – also has a fair bit of action, especially at the start.

Hands down, the authors. These folks not only donated their time and their stories to this book, but they were all so gracious and humble in the editing stages. The vast majority of them – dare I say all – have never collaborated with other writers on anything like this. Many have never collaborated on a writing project at all. So the idea of wrangling twenty personalities together to create a cohesive story is mind-boggling! But they understood what we were trying to do, knowing there wasn’t a precedent for us to follow. I can’t thank all of the 19 other authors enough for trusting me (and Sara Benedict) with this vision we had. This book is so special!

Do you or does anyone you know prep for disasters?

Yes, my co-founder of Band of Dystopian. Cheer Papworth’s family preps for disasters. She’s well-stocked and her stash is in a top secret location! Seriously impressive.

What do you think would be the scariest kind of apocalypse?

I can’t remember the name of it, but sometime back in the 90’s, I think it was, or maybe early 2000’s, I watched a movie where the power went out indefinitely and people were breaking into each other’s homes, looting everywhere, and hurting people. It was a survival thing, like finding a safe place where you can get supplies but also protect yourself from horrible people taking advantage of the lawlessness. To me, that’s the scariest thing. Anytime the power goes out for longer than a few minutes, I’m always super on edge and imagining how to protect my family from horrible people like the bad guys in that movie. People are far more terrifying to me than any other threat or creature. What are you going to do if someone breaks into your house or something and there are no police to call? I have a two-year old to think of!

My story, Martial Law, follows a rogue National Guardsman doing search and extraction missions, finding survivors and bringing them to safety. It all goes horribly wrong when his co-pilot disappears with his helicopter.

As Prep For Doom’s managing editor, I had the unique perspective of seeing everyone else’s stories before writing my own. In fact, with the way the stories were written with connections and the overarching plotline, my team (Cheer Papworth, Sara Benedict, and Angie Taylor) and I knew there needed to be a conclusion, and as the only author who’d seen all the stories, we knew that had to be me. I had a lot of fun bringing in characters from other stories throughout the book and giving a bit of closure to several characters as well as the book overall.

A message from ER Arroyo

As we near the release of Prep For Doom – mere hours away – I want to humbly express my utter gratitude for all of the support this book has received.

In the very beginning stages when this was nothing more than a Facebook conversation with a few dozen authors. Later, when we were editing and the authors in the book were so supportive of each other and of BOD’s vision for PFD. The Kickstarter campaign that absolutely blew our socks off in an unbelievably short timeframe. Likewise with the Thunderclap campaign. The enthusiasm our Band of Dystopian Authors and Fans members bring to anything we do never ceases to astound Cheer and me, and make us so, so happy to be a part of it.

I want to thank Cheer, Angie, and Sara for helping work through the story submissions and make the impossible decisions of which to keep. Thanks especially to Sara Benedict for helping me edit, and for always being a sounding board for ideas and different problems that arose, and helping me find solutions. Also, thank you Sara and your team at Your Elemental Solutions for being with us every step of the way, from creation to publication and beyond.

Tomorrow, at long last, we will debut this book at utopYA Con in Nashville, TN. You can also expect some noise on BOD for the release, as well as a huge release party on the 27th.

On behalf of Band of Dystopian and all of the Prep For Doom authors, we hope you love the book!