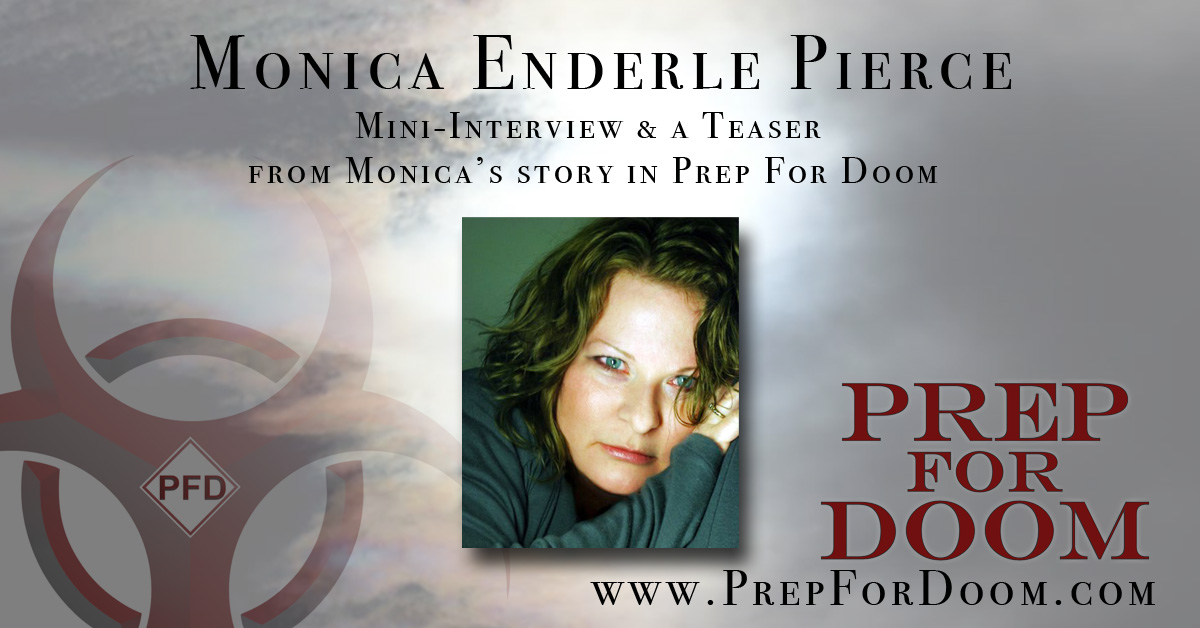 PFD Story Title: Blood Brother
PFD Chapter: Nineteen
Main Character: Harman, a man on his way to meet up with his brother at a bunker

Luca lifted his shot glass. “To brothers reunited at the end of the world.”

Harman raised his glass too, and then downed the shot, welcoming the liquor’s heat as it seared his parched throat.

Luca took Harman’s glass and put it beside the Double Cross bottle. “We’re familia.” He turned and gripped Harman’s shoulder. “And we take care of each other.”

Strangely, my favorite aspect of this project is the fact that I have a story in it. When it was first proposed, I threw my hat in the pile immediately, knowing it would be a unique opportunity but tough on my already tight schedule. As the deadline loomed, I was struggling to make my story work, struggling to find the time to fit it in between another anthology deadline and volunteer work for my daughter’s school, and struggling to overcome bronchitis. Tired and frustrated, I decided to withdraw from the project. Then E.R. posted on Facebook that she needed more stories with characters who were heading toward the Kingston bunker rather than Staten Island. So I sent Harman north and started thinking about the unintended victims of villains — their families. With that, the story wrote itself within two days. And, happily, Blood Brother is the penultimate chapter in this very fine anthology.

How did you prepare for writing your PFD story? Any particular research or personal experience?

My main character Harman was inspired (very loosely) by a family friend whose extensive world travels included time spent living in the Orinoco with the Yanomami tribe. Our friend is Romani and one of the most interesting people I’ve ever known. With that basic background in mind, I researched the Roma culture and very quickly learned about their tight family-based society, as well as the social pressures the Romani face worldwide. The experiences of Harman and his brother Luca are based upon a documentary I watched about the Romani in Slovakia. I wasn’t looking for a reason for the brothers’ actions when I started my research, but that documentary and news footage covering Neo-nazi attacks on Roma neighborhoods throughout Europe, presented an impetus for intelligent, but sensitive, men to make some disturbing choices.

What was it like working with the other authors to create such an integrated anthology?

As I said before, this tale came together after E.R.’s request for more Kingston stories. The events and characters’ actions evolved as I had discussions with Kelsey Gegan, who was working on a Kingston-based story, too. (Thank you for all your geographical information, Kelsey!) Then some back-and-forth brainstorming sessions with E.R. via Facebook helped me hone my characters and tweak my story to fit the whole collection. A great deal of discussion took place in the PFD Facebook group, and it was great fun to see details that the other authors were putting into their stories. E.R. made the editing process a snap, and I quite liked making little changes (per her suggestions) knowing that they were threads tying my story tighter to others in the anthology.

Have you ever experienced a major disaster that made you think about end of the world scenarios?

I grew up in Southern California where earthquakes and wildfires were anticipated yearly experiences, and the Cold War meant neighbors with fallout shelters and nuclear blast drills at school. I was an infant during the Sylmar earthquake and an adult for the Northridge quake. Growing up, we watched wildfires burn friends’ homes and took meals to the firefighters who stood between our house and fifty-foot flames. (There’s definitely something apocalyptic about a black sky, hot howling winds, and a red-eye sun.) By the time I was eight, I knew how to pack for evacuation and knew my job was to beat out burning embers with a wet towel as they landed in our yard. And, as a young adult fresh out of college, my shared apartment dodged the destruction of the Los Angeles riots (post-Rodney King) by virtue of one block.

I learned from those experiences that at the end of the world, the only thing that will matter is the people we love.